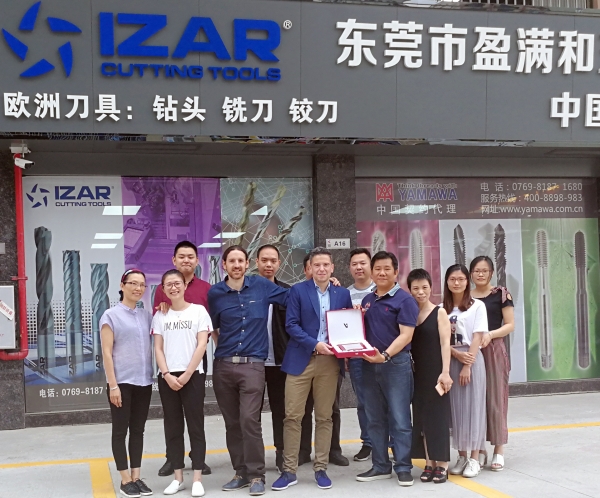 The shop is located in Dongguan, a prefecture-city of eight million inhabitants, strategically located in the centre of the province of Canton, 90 km from Hong Kong. Specifically, it is located in the area called "Cutting Tools City" of Dongguan, a commercial area specialized in this type of tools such as drill bits, end mills, taps, etc.

IZAR continues, in this way, with its international expansion, which currently allows it to have a commercial presence in 90 countries around the world. One of the strategic export areas for the company is located in Southeast Asia, especially the giant Chinese market, where it has been working intensively for the last three years. The company has attended the most important trade shows in the country: Shanghai, Ningbo, Hangzhou, Shenzen, Zhejiang, Suzhou ... or Dongguan itself, where this opening has taken place.

With this first store in China, IZAR becomes a pioneer and a reference in the quality cutting tool manufacturing and commercialization in the second economy of the planet. At the same time as, it reinforces its presence in this geographical area, vital both demographically and economically, where also it sells in countries like Vietnam, Thailand, Malaysia, Indonesia, the Philippines, Korea or Japan.

In the picture, Aitor Casasempere, IZAR export manager, accompanied by Beñat Fuentes, area manager in Southeast Asia, gives the managers and workers of the establishment a commemorative plaque for the first opening of an IZAR store in the Far East .

Tweet
News
More in this category: « IZAR: 50 YEARS OF OPENING TO THE WORLD HSS Forum Conference 2016 »