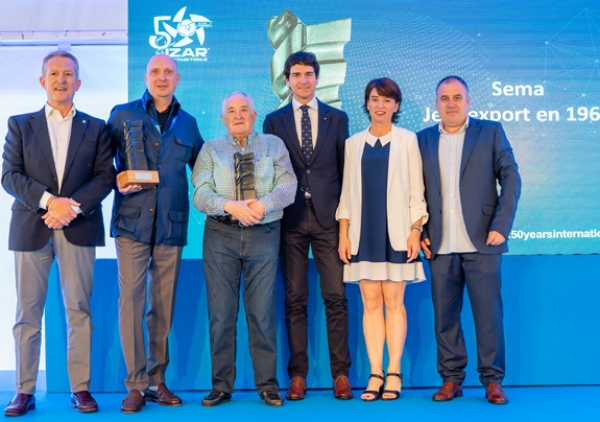 Last Friday, June 28th, IZAR celebrated its 50th anniversary, and being an international enterprise, a hundred guests from all over the world, customers, associates, authorities and friends, attended the event at the facilities of the cutting tool manufacturer from Amorebieta.

The event kicked off with an institutional ceremony during which Carlos Pujana, CEO of the company, and Estibaliz Hernáez, Vice-counsellor of Technology, Innovation and Competitiveness of the Basque Government, welcomed the attendees.

Unai Rementeria, President of the Government of Biscay, presented one of two awards given during the ceremony to Hervé Gendebien, from Beltracy, IZAR's first international customer back in 1969 and the firm's current dealer in Belgium. The other award went to José María González, head of export at IZAR at that time, given by Andoni Agirrebeitia, Mayor of Amorebieta. The ceremony concluded with an Aurresku, a traditional dance of honour by two workers of the company for the award winners.

After that, representatives of the company presented, on the one hand, IZAR's export trajectory during this half century and, on the other hand, the key products and services that have made this development possible, backed up with audio-visual material specially prepared for the occasion, such as, for example, a video that explains what materials, processes and people from all over the world are required to be able to manufacture one single drill bit competitively.

Benoit Girondel, a French professional mountain trail runner, conducted a coaching session for the attendees, in which he links the values of IZAR with those necessary for an activity as demanding as his. Later, in the afternoon, he led some 140 people, attendees of the event, workers from the company and villagers of all ages, up Belatxikieta, a mountain close to Amorebieta.

After the coaching session in the morning, the guests were shown the production process of IZAR tools, with IZAR’s characteristic customer-geared lean manufacturing focus, as well as the exhibition areas with different packaging and demonstrations of the tools themselves, with special emphasis on the new hard metal solutions.

They also witnessed the more altruistic side of the company during an auction-raffle with different prizes, the proceeds of which were given to Unicef, an NGO with which IZAR collaborates closely within its social responsibility policy.

After the traditional Basque dinner in a cider house the night before, the meal after the official ceremony had a more international touch and the guests were treated to a varied international menu with gastronomic influences from the five continents. In the after-meal, there was room for more surprise tributes and a small token of appreciation was given in the form of a Txapela or Basque beret that symbolises respect and recognition to the bearer.

In the afternoon, as an alternative plan to the hill walk mentioned above, the rest of the attendees opted for a boat trip along the Bilbao Estuary, starting at the Getxo marina and ending at the Hanging Bridge in Portugalete, a World Heritage Site.

Finally, after an emotional day surrounded by people from all corners of the globe, it was time to celebrate the internationalisation of IZAR, thanks to which IZAR is present on more than 90 markets around the world, with our closest allies: the workers of the company that day by day make this feat possible, who came with their families and relatives to the open day on Saturday 29.

During the more intimate celebration, some 300 workers and their families enjoyed an unforgettable day, including visits, gifts, games and workshops for children, a meal, disco ..., in short a day of fraternisation and camaraderie.