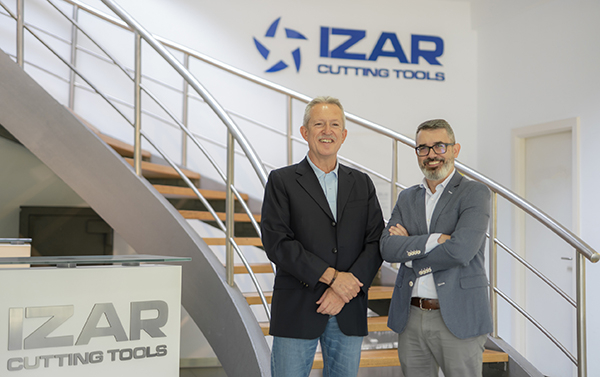 On the 1st of September 2022, Oscar de Manuel will assume the General Management of IZAR Cutting Tools SAL, replacing Carlos Pujana, who will continue to be linked to the company, advising the Board of Directors.

Carlos joined the company in 1997 as General Sales Manager. He reorganized the commercial policy and renewed the sales network, innovating in products, segmenting markets and renewing the brand image at the point of sale, in addition to investing in logistics excellence, managing to expand sales to more than 90 countries all over the world.

In 2004 he assumed the General Management, from where he continued the powerful investment policy that the company had begun in 1998, and promoted the building of a new factory, with an investment of more than 18 million euros, inaugurated in 2008 and today become one of the most modern tool factories in the world, carrying out, at the same time, a complete generational renewal of the personnel.

His work at IZAR was recognized in 2011 with the "Euskal Manager" award, as the best manager in the Basque Country, an award organized by the Basque tv and the economic press, whose jury is made up of Basque employers' associations.

Oscar De Manuel, for his part, is an industrial engineer, speaks English and French fluently and has been linked to IZAR for the past year and a half as Deputy to the General Management.

During this period, he has led the project to implement a digital factory model and has contributed to the development of a professional progression model for the people in the organization. Currently, he drives the reflection that will define the company's strategic lines for the 2023-2026 period.

He has a solid additional training in leadership and managerial skills, in addition to a recognized previous professional career in social economy companies, where he has assumed the positions of both Sales Director and Industrial Director.

Oscar De Manuel takes on the challenge of leading the global growth project of IZAR Cutting Tools SAL, a development in which we wish him the greatest success.